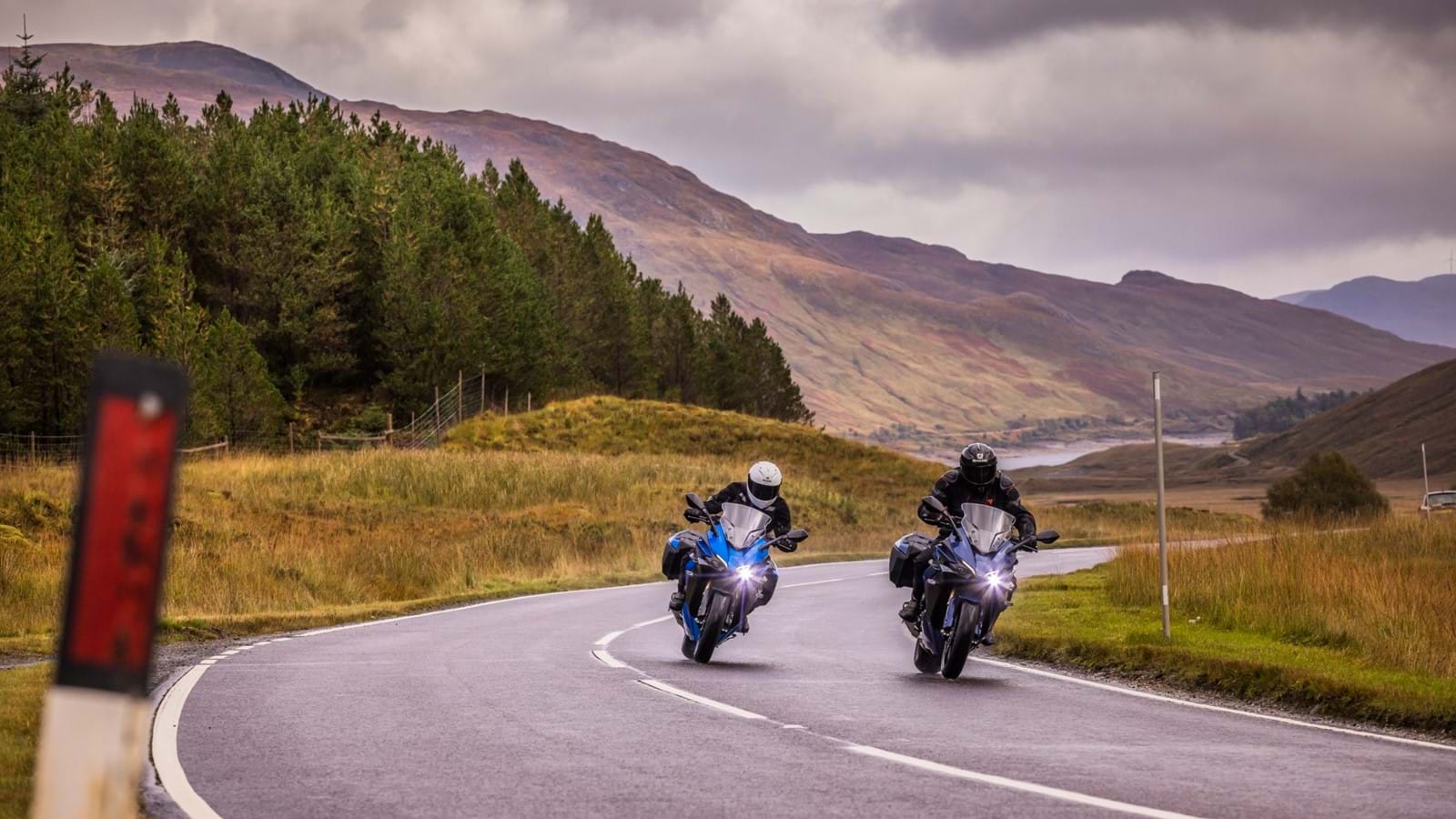 Back in October last year the UK press launch of the new GSX-S1000GT took place in Scotland, with each member of the media spending two days in the saddle, ensuring they got the fullest impression of the bike possible. Now, with spring around the corner and people making their riding plans for the year, here’s some riding inspiration if you’re planning a trip to the land of whisky, haggis, and shortbread.

Scotland is one of the best places on the planet to ride a motorcycle. Fact. We all love a European tour (or further afield, in some cases), but the fact remains that some of the best roads and scenery in the world are on the British isles.

For the launch of the GSX-S1000GT we plotted a route taking some of the best roads – some well known, some less so – and biggest scenery, from the mountains in the west, over the Cairngorms. 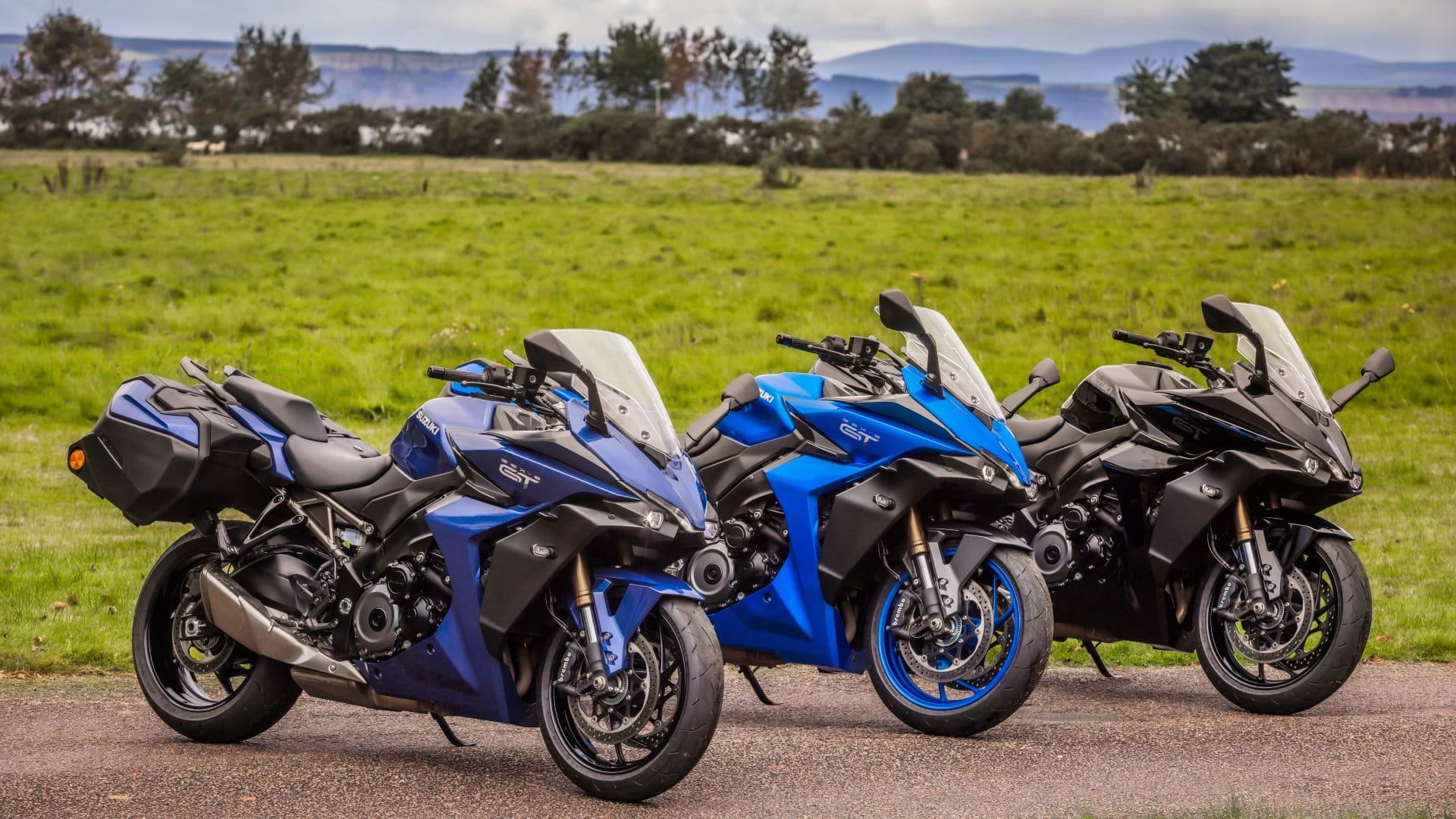 Our route begins in Nairn, and is steady away, picking up the A96 to Inverness and then the A9 out the top of the city, including a short stretch of dual carriageway work (flick on the cruise control for a spell and steal glances of the Beauly Firth on your left and the open water of Moray Firth on your right).

At a roundabout join the A835, signposted Ullapool, and this is where the fun starts. After a few more miles of standard A-road stuff, it transforms into a rollercoaster, twisting and turning its way through stunning scenery; in our case trees with orange, gold, and red leaves set against mountainous terrain as we pass through in the autumn. It descends to the shore level of Loch Garve, and through the town itself, giving you a chance to back off and enjoy the views, which are just a snapshot of the things to come.

As you exit the town a junction comes up pretty quickly, at which you want to divert off and onto the A832. The twistier nature of the A835 now makes way for swooping, sweeping turns through trees, initially, before opening up as you join the shore of Loch a' Chuilinn. 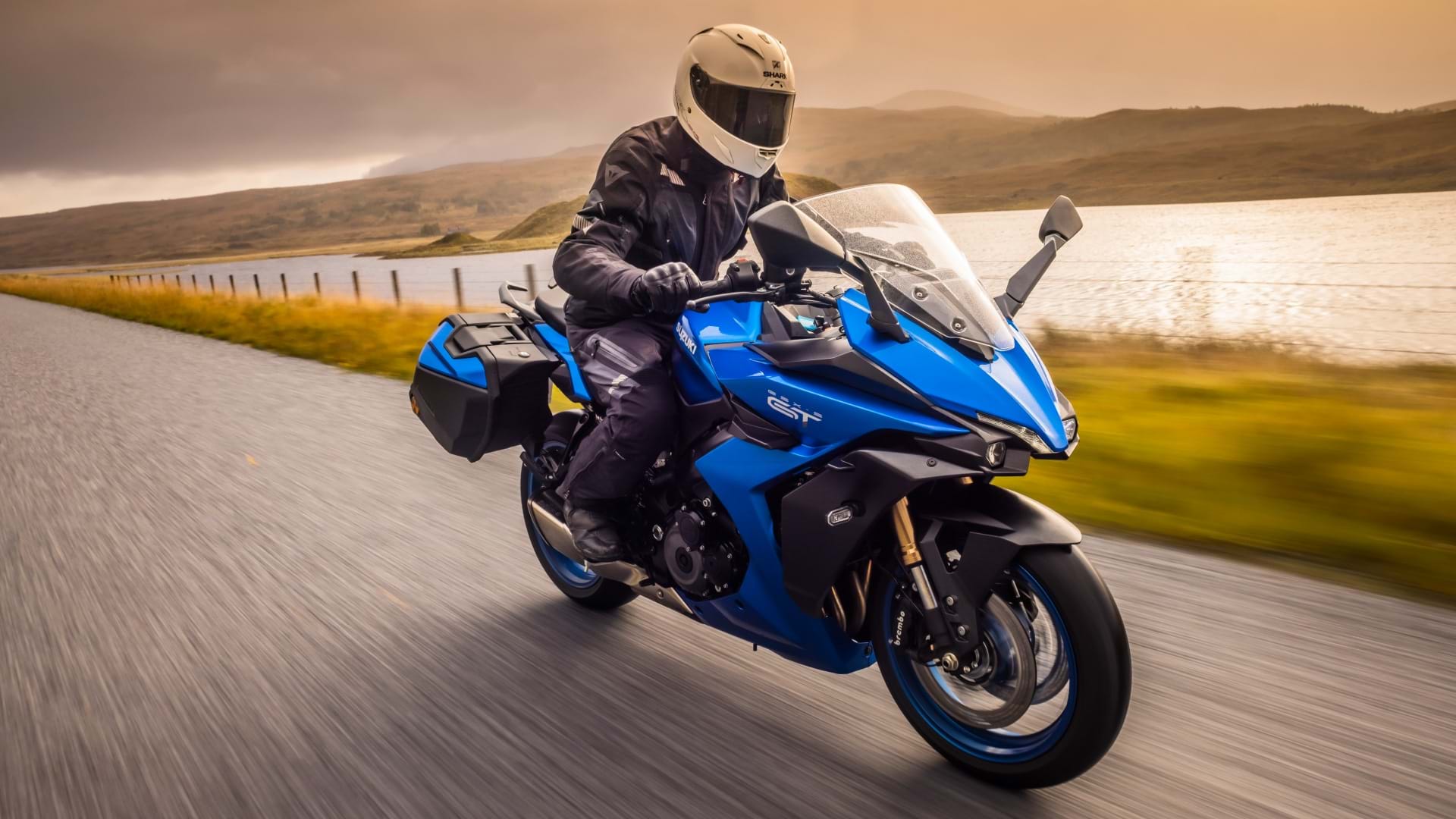 And it’s stunning. This whole section, from here all the way to Achnasheen (where you take a left at the roundabout onto the A890) is all about soaking up the views: wide, desolate landscapes, with lochs and bodies of water strewn out in front of high, imposing hills and mountains, the tops of which aren’t always visible through the cloud.

Before, you’re dancing through the gears, up and down the box using slick quickshifter, jumping on and off the brakes, going corner to corner, point to point. But now, now you chuck the bike in top gear, and waft along, simply marvelling at what looks like something from Lord of the Rings.

Cruise onwards, but eventually the land rises up, and you’re plunged back into tree-lined twisties. They start shallow, but be aware, because soon the road tightens, and it’s back to flicking side to side, and for us that means using the GT’s wide ‘bars to lever them into corners.

It’s thirsty work, and, in the rain especially, mentally taxing. Luckily, there’s a café on the road into Lochcarron: the Albatross café of the Lochcarron golf club. But no one is on the course when we arrive. 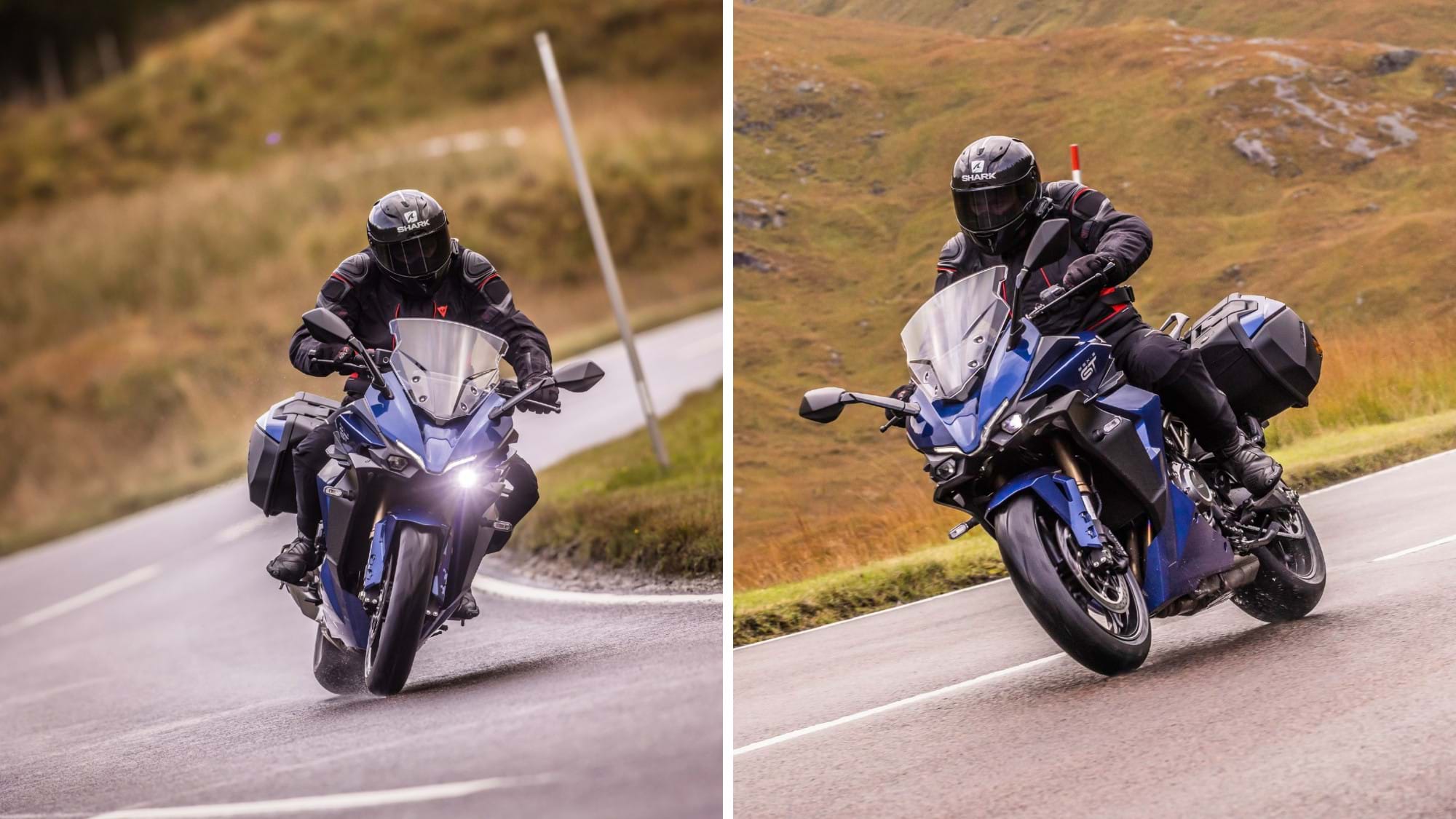 Once you’ve had your fill of coffee and cake, head back the way you came, and then turn right, following signs for Kyle of Lochalsh, Skye, and the A87. This is the naggeriest section of the route, and for many of the next few miles, as the road tracks the opposite shore of Loch Carron compared to the one you just had coffee on, it descends to single track, with narrow tunnels through the rocks. However, it’s offset with views of the water.

Eventually the usual two-lane carriageway is restored, and it’s back to carving through sweeping bends. The road climbs through the trees, only to descend shortly after, gifting you views of the Isle of Skye in the distance.

On this occasion we’re skipping the picturesque island, and at the bottom of the hill turn left on the A87, following signs for Fort William.

You’re on here for the next 30 miles now, and it’s arguably the most impressive part of the route with the most dramatic scenery; the road follows the water’s edge in places, and in others snakes through valleys. 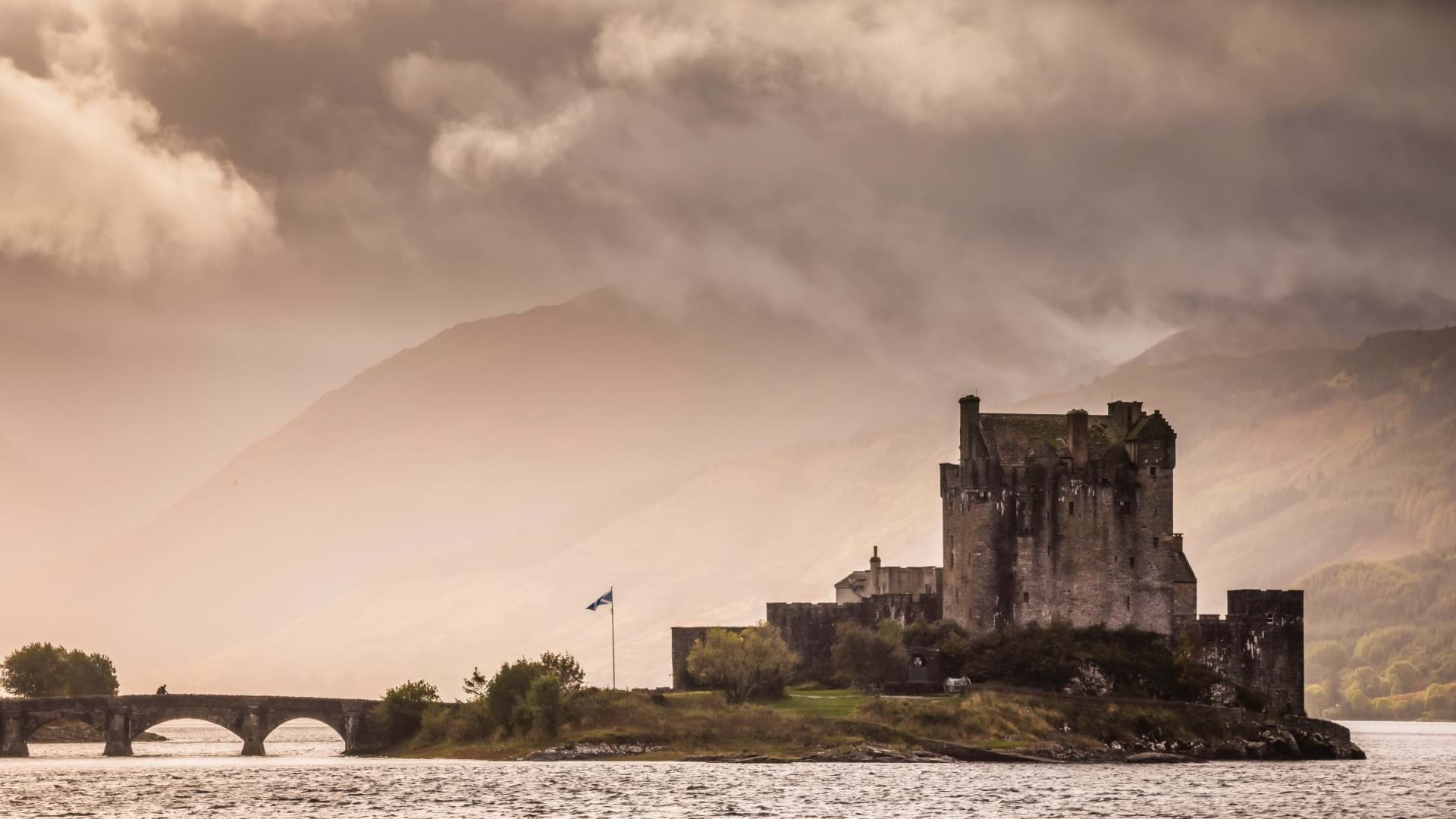 But, as good as the views are, the riding is better. The surface is incredible, with grip in abundance, even in the wet. Which is good, as the corners come thick and fast. Straights are not a thing here.

Out of the corner of your eye you catch a waterfall, a mountain you didn’t spot before, or a castle. But there’s no time to gaze for long, because a chevron board is fast approaching, warning you of the next set of corners. It’s relentless, but in a good way.

On our ride no one wants to stop, but after 20 or so miles we elect to drop into a fuel station; there’s some gas left in the tank, but they’re scarce in this part of the world, so we opt for a splash and dash. 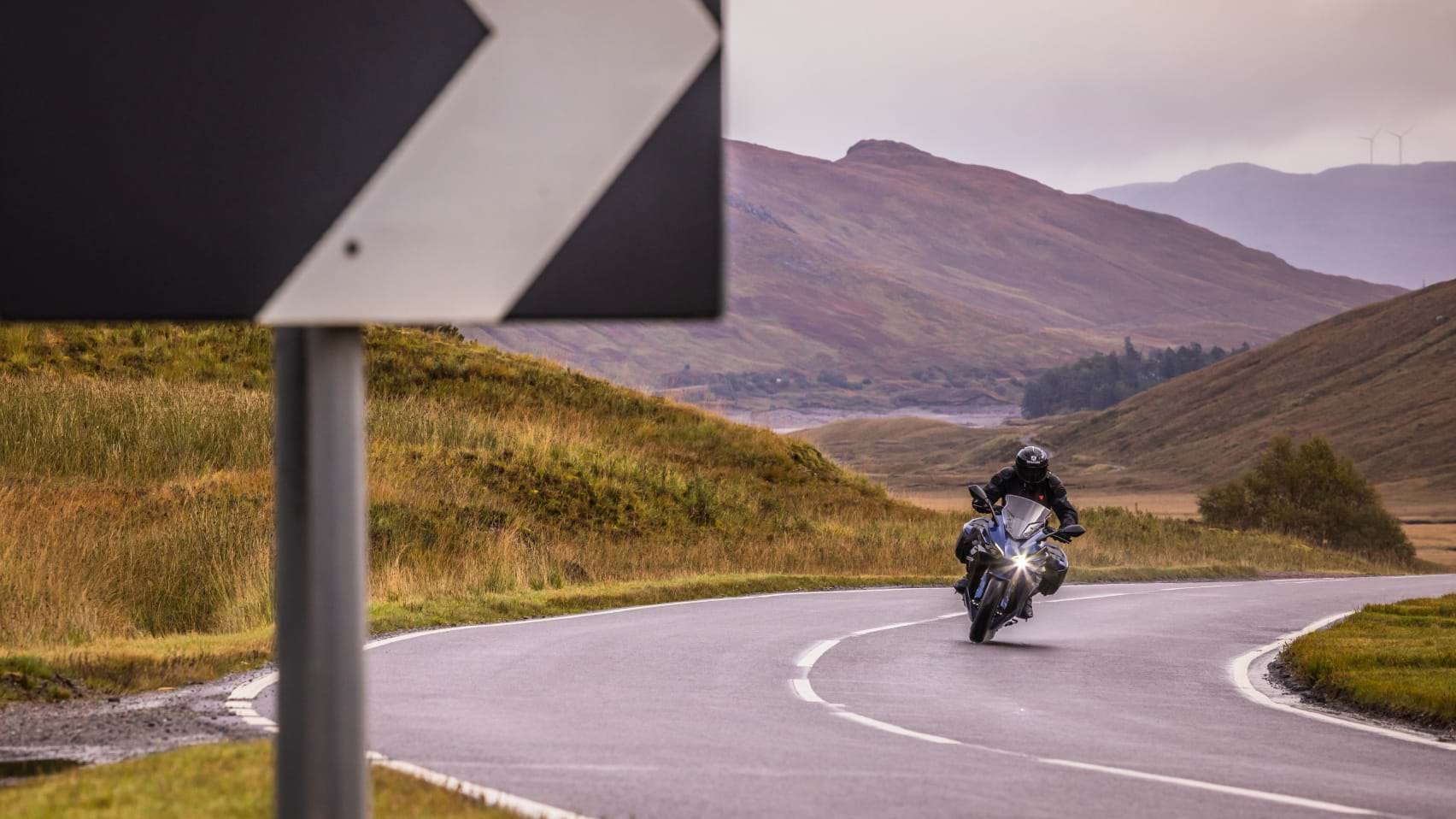 10 miles further on and the A87 diverts south, towards Fort William, but continue on straight and join the A887. The lunch stop is on the shore of Loch Ness, and at Invermoriston head south on the A82 to Fort Augustus. Just as you’re passing out the other side, on your left, is the Highland Club, luxury apartments set in an 18th century abbey with stunning gardens. Follow the road round the Boathouse restaurant, set on the shore at the very bottom of the famous body of water.

Once suitably fed and watered rejoin the A82 south, and strap in for the final leg of the day’s ride. From here the route’s simple: the A82 to Fort William, but the riding is anything but, and you are again confronted with non-stop turns, the road snaking up and down, winding its way south. It’s also more of the same on the scenery front, as you pass through trees one minute, and run down the side of lochs the next. It’s incredible.

32 miles later you arrive at Fort William, with plenty of choices and a wide selection of hotels, B&Bs, restaurants and bars (though we recommend the Black Isle Bar). 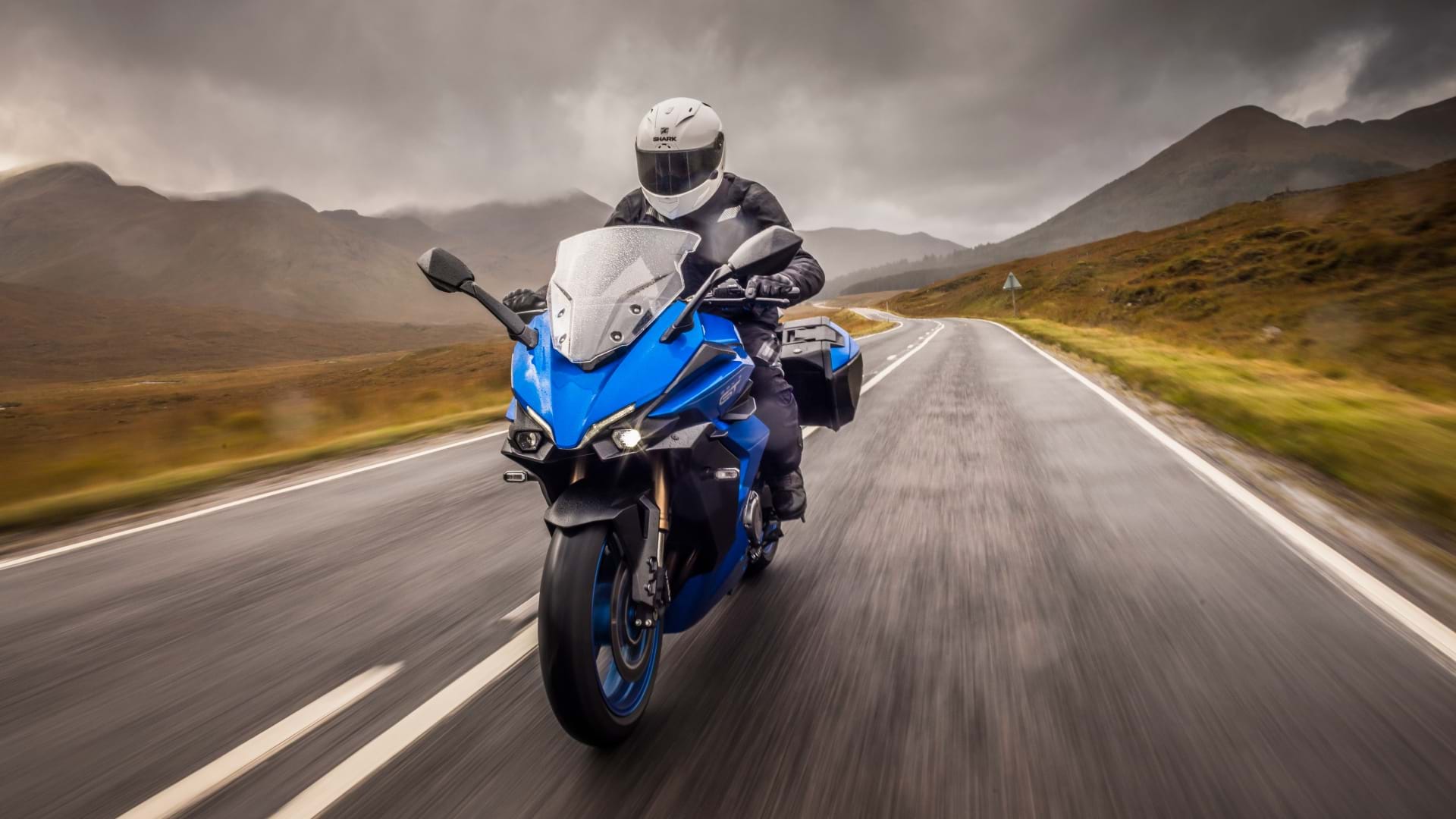 The second day’s ride only take in 100 or so miles, but it also includes a brief stop at Dalwhinnie distillery, for research purposes, obviously, before tackling some of the Cairngorms as the route returns north to Nairn.

To start the day, rejoin the A82 and head north, but only as far as Spean Bridge. Here the road becomes the A86 and heads east. If day one was about amazing scenery with great roads thrown in, today is more about the road. Though the views aren’t too shabby either.

There’s no easing yourself into this section, the one corner links into the next, meaning you need to be scanning ahead to ensure your exit from one doesn’t compromise your entry into the next. And watch out, there are a few that tighten just as you expect them to open up.

But the rewards are worth the effort, and there’s a tangible sense of accomplishment as the road finally straightens out, and as it does so just as you arrive at yet another loch. As we cut through on our ride the sun hasn’t long been up, and is glinting beautifully off the still surface. 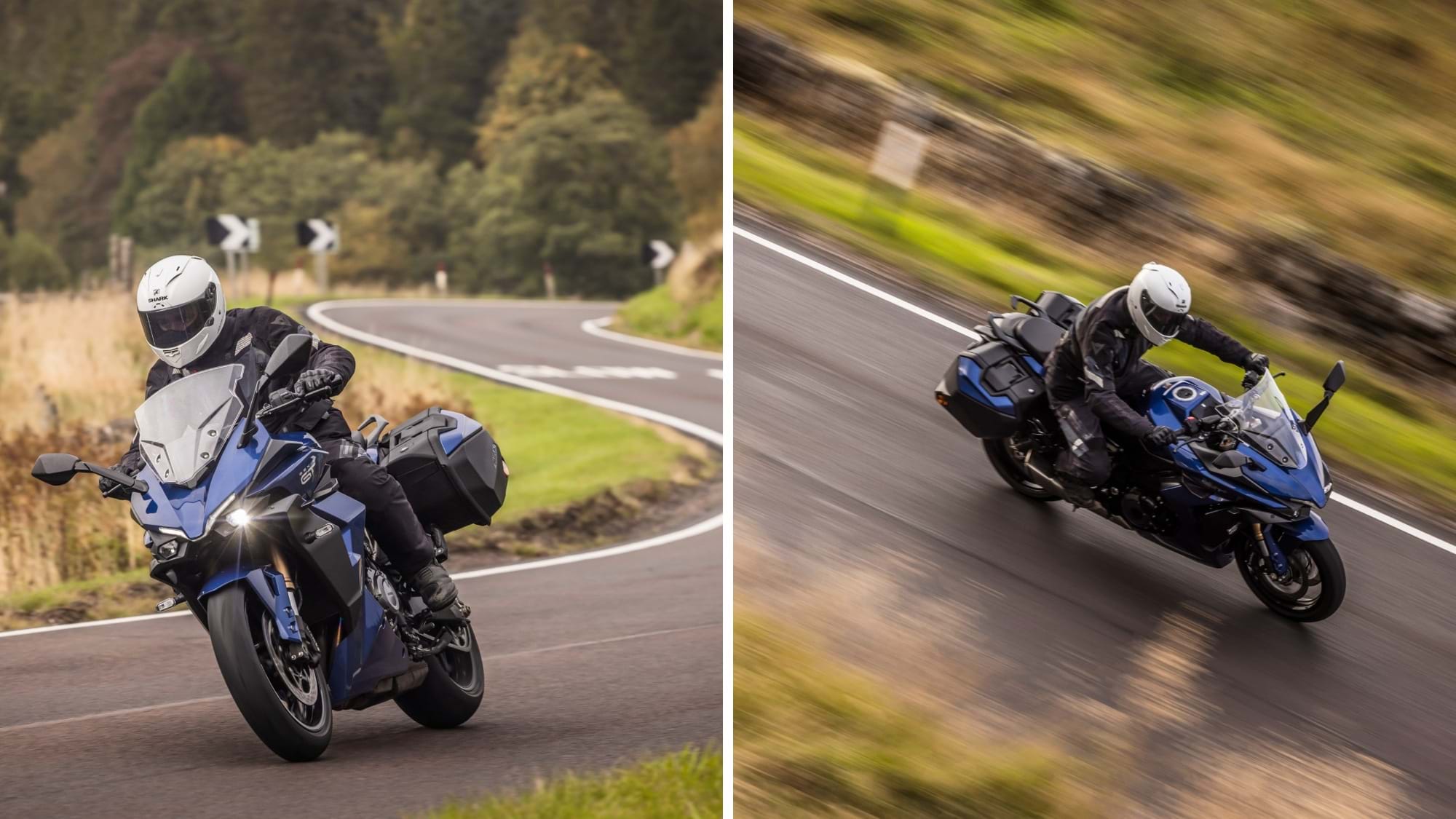 After passing Loch Laggan the corners return, and it’s back to attack mode, but make sure to catch the right hand turning towards Dalwhinnie, using the A889. Even if whisky isn’t your thing, the tour is fascinating.

Tour complete, taster kit stuffed into the GT’s panniers (along with anything else that took your fancy) retrace your steps back to the A86, and turn right towards Inverness and Newtonmore.

Ignore the A9, though, this route takes you under the main road north, and onto the lesser known B970.

It loosely runs parallel to the A9, but instead of heading straight, or straight-ish, it gives you something to do, and after passing a couple of small towns, it’s back to the good stuff. 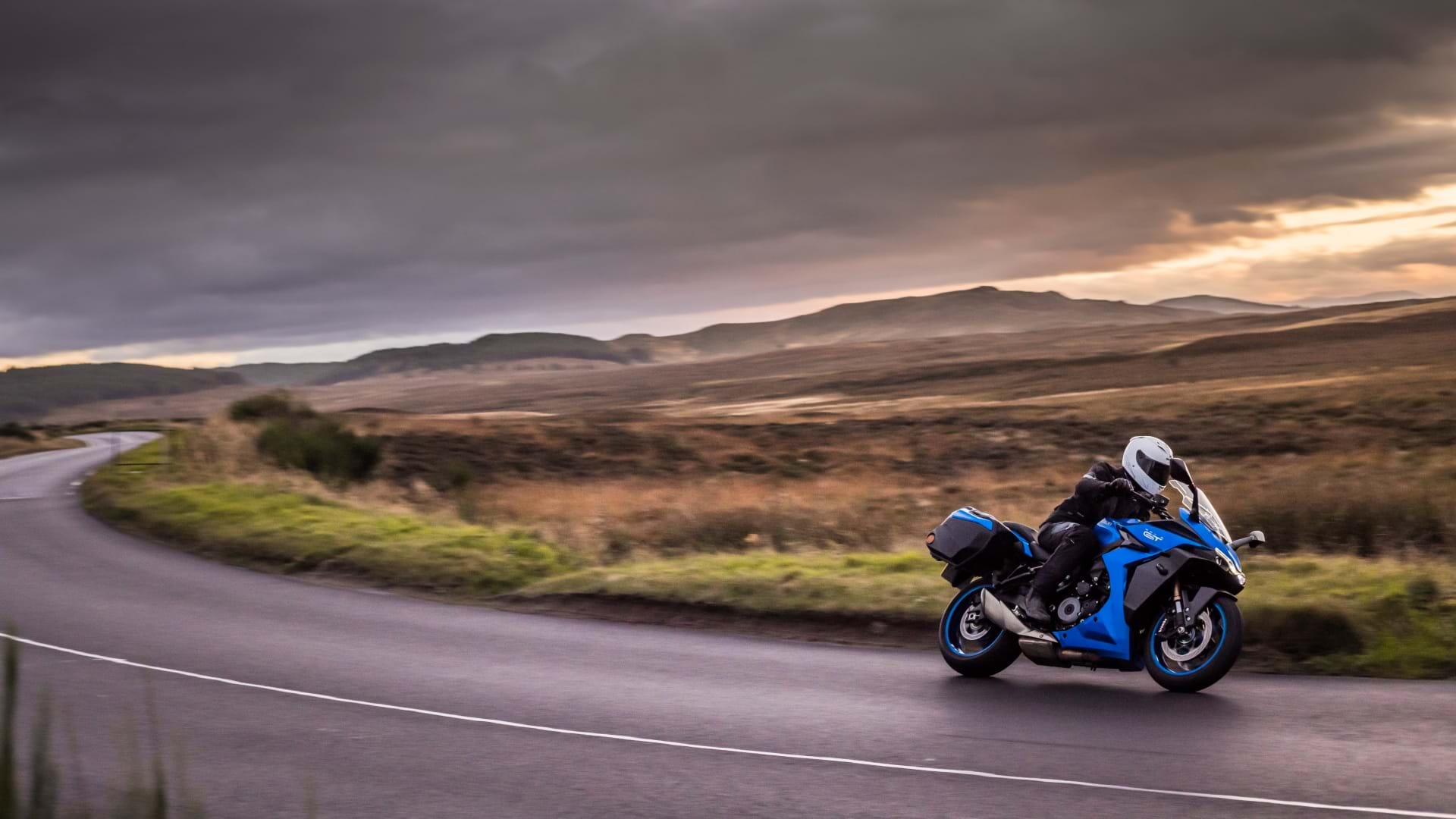 On our ride we stopped for coffee and another slice of cake on the shore of Loch Insh – aptly but confusingly named the Boathouse – which is a slight diversion when you get to Kincraig, then continue on the main route to Aviemore.

After the ski resort join the A95, and follow it toward Speybridge, but pull off and follow signs to Grantown-on-Spey, picking up the Old Military Road: the A939.

From here, it’s riding nirvana all the way back to Nairn. The road is superbly surfaced with twists and turns, climbs and descents through trees and over heathland. It’s not as out-and-out dramatic as the views further west, but it is equally impressive in its own way and riding is arguably better.

Watch out at a fork in the road, where the A939 bears left, but other than just keep going, and savour every mile. 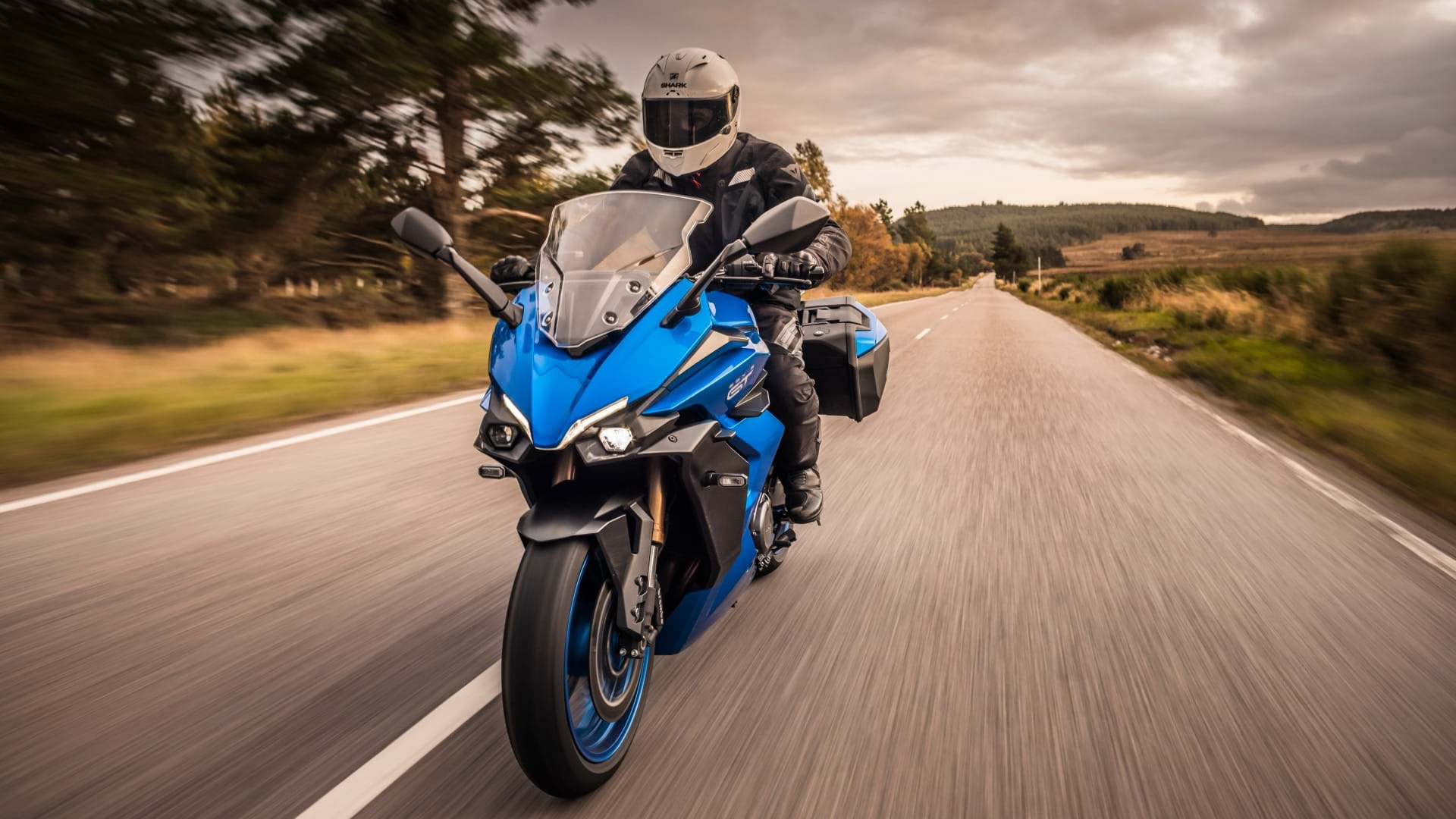 Eventually, for us, the ride comes to an end, with media guests having to transfer for flights and trains. But with more time you can add miles by heading south from Fort William in the morning and tackling Glencoe – a route press guests traversed on a 2013 Burgman launch – before heading west to Pitlochry and picking the Old Military Road further south.

But there are many great roads in the region, and now is the best time to plan this year’s getaway.